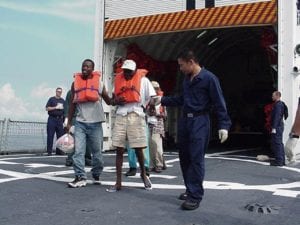 US President Donald Trump’s administration intends to give the Mexican authorities $ 20 million for deporting illegal migrants from Mexico, mostly from Central America.

This is reported by The New York Times referring to a document sent to the Congress, in which the administration asked for appropriate financial resources.

According to calculations by the US authorities, this amount should be enough for Mexico to pay for aircraft and trains, which should take out of the country about 17 thousand illegal migrants.

It is expected that this step will contribute to increasing the number of deportations from Mexico to Central American citizens, many of whom plan to travel through Mexican territory to the border with the United States.

Previously, Trump said that the US authorities have already spent $ 3.5 billion on building a wall on the border with Mexico to solve the problems of illegal migration.

The Mexican authorities refused to receive $ 20 million from the United States for the deportation of migrants to their home countries. This is reported by Proceso with reference to an unnamed Mexican official.

According to the portal, this decision was taken by the current Mexican government under the pressure of the team of the elected president of the country, Andres Manuel Lopez Obrador.

“The Mexican government did not agree to accept $ 20 million, they are in the” Merida Initiative “foundation, but they did not accept them for repatriation,” he said.