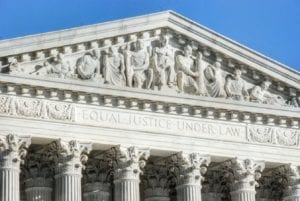 On Friday, the Supreme Court rejected the Trump administration’s request for the new policy of denying the right to asylum to immediately enter into force for those who illegally cross the US-Mexico border. This innovation was announced by the lower courts as potentially illegal, and the higher instance supported their opinion.
Earlier this month, a panel of judges of the US Court of Appeals for the 9th district upheld the decision of the lower court, which stopped the introduction of the new policy, writes the Washington Post. The court stated that this change is a way to bypass the letter of the federal law that allows anyone who enters the United States to apply for asylum, regardless of the border crossing point.

The new rules proposed by Trump prohibit seeking asylum to anyone who crosses the US-Mexican border outside official checkpoints – a reaction to the caravans of migrants from Central America.

Trump called US District Judge John Tyghar “Obama Judge” when he blocked the innovation on December 19, and then refused to immediately restore it. This provoked a reproach against Trump from Chief Justice John Roberts Jr., who defended the independence of the federal judiciary.

Lee Gelert of the American Civil Liberties Union, representing those who challenge these rules, said in a briefing at the trial that this policy cannot be justified, adding that this is fundamentally unfair to those who have legitimate asylum applications.

According to him, “those who flee from persecution are desperate and most often unsophisticated, are not aware of the possibility of applying for asylum at the point of entry, are persecuted by gangs and individuals and therefore cannot reach these ports because of the danger and distance “.

Recall that on Thursday, the US Department of Homeland Security announced a new policy that prohibits asylum seekers from entering the US and is demanding that a decision be expected in Mexico.

Also two weeks ago, Donald Trump offered to charge $ 50 from anyone who wants to seek asylum in the United States.