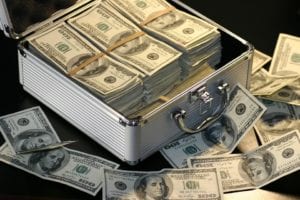 The owner of the $ 560 million jackpot achieved anonymity
The real name of the owner of the 7th largest lottery prize in the US remains a mystery. On Monday, March 12, the Hillsborough Supreme Court, finally granted her request for anonymity.

The trial began in January 2018, when a woman, acting under the pseudonym Jane Doe, was concerned about her safety in connection with a big win: on January 7, she received the Powerball jackpot at $ 559.7 million. On the idea of ​​demanding non-disclosure, the winner was given several cases when the winners became victims of scammers, robbers and even murderers. On January 23, Jane Doe filed a corresponding petition.

Her desire was contrary to some Powerball rules and jeopardized the very possibility of winning. However, the court took the side of the lucky woman, ruling that her safety is superior to the importance of the rules of the lottery. According to the court’s decision, the representatives of the plaintiff will receive for her a one-time payment of $ 352 million ($ 264 million after payment of all taxes).

As part of this amount, Jane Doe will share with the needy. The first donation will be $ 249 thousand, and in the future the woman plans to allocate up to $ 50 million for charity.

The heroine of this story – while the only owner of the jackpot Powerball in 2018. The nearest drawing of a super prize in $ 420 million will take place on Wednesday, on March, 14th.