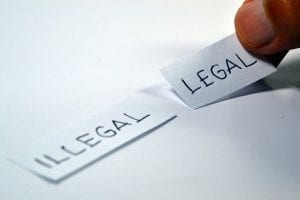 If a person lives illegally in the country, he or she can be deported. How is the deportation process going on?

In the United States live thousands of illegal immigrants. Each of them has its own story of how they got this status, many are not unjustly afraid of deportation. However, life in their homeland is many times worse than the illegal situation in the United States, which makes them stay in more comfortable conditions in an unlawful situation. Many find various legal ways to stay in America, the most common is a marriage in American.

We hope that you read this material for informational purposes, because you live legally in the country: you have obtained citizenship, a residence permit or a long-term visa.

But in the treasury of our advice for migrants and travelers, there can not be an article on deportation, because this is an important issue.

Without a court decision, illegal immigrants are not deported

Deportation is preceded by a court hearing: the foreigner is detained and taken to the judge who deals with migrants’ cases. It is important: if the detainee does not have money for a lawyer, he will be provided with a free opportunity to get a qualified lawyer’s help. Please note, if you have proof of your lawful stay in the country, it is better to hire a good lawyer who will help to substantiate your position in court, not leading the process to a court decision in favor of deportation.

Even if the judge made a decision on deportation, it can be challenged. In the United States, as in other countries of the world, where the laws of justice work as expected, the decision of the court of first instance can be challenged. All the time of the trial, until a decision on the person is made, he can either be detained by the police, or remain at large, provided that the pledge is made.

But the process can and does not drag out, and admit his guilt in illegal stay and leave the country, independently paying for transportation costs. This option is suitable for those who are planning to return to the United States in the future, but go in a different way: to get the right to reside there legally.

If there is no money to pay for transportation costs, and the court has decided on your deportation, it may take several months from the moment of taking this decision to execution. Most likely, this expectation will take place in a special prison, where the US authorities contain all those who have been deported for trial.

Option, when the court decision on deportation may not be executed

Note that the court decision on deportation may not be executed. And this is not contrary to the letter of the law, the fact is that law enforcement agencies have the right not to deport even those who are recognized as illegal and the court has decided to deport. How is this possible?

It’s simple: the authorities are not interested in expelling from the US those people who have relatives or close friends in the country and can settle in the country with their help. Also, people may be left in the country, although they are illegals, but who have a prestigious education or unique work experience. In some cases, a person who witnesses a crime and is ready to testify in court can not deport.

How is deportation going on?

If there are no chances to stay, the deportation is as follows: a person is sent home by a direct flight from the US to his homeland. Moreover, with a high degree of probability, the people responsible for the deportation organize the escort of the deported directly to the aircraft. In some cases, a person will be able to receive his documents only upon arrival at home, this is a guarantee that the person will not return back from the plane.

If a person who is involved in the commission of a crime, most likely it, is deported from the US, they will accompany the airport of arrival to the airport to hand it over to the authorities. And the deportee will fly this flight, although in comfortable conditions, but in handcuffs.

What should I do not to be deported?

Although at the very beginning of the article we talked about the fact that thousands of people live illegally in the United States, they can not live permanently in fear of deportation.

Banal, but very accurate advice: not to allow your stay in the States was illegal. There are many options for living in this country with the permission of the migration service. One of them will definitely suit a person who wants to move to live in the US.
For example, it is very relevant now for business immigration in the United States. When you invest in the country and get the opportunity to live and work legally in the states.

You can ask for help from intermediaries, organizations that work in this field of business, or independently study resettlement options and implement the appropriate one. Perhaps among your acquaintances there are migrants who will be able to share valuable experience, because in any procedure there are such nuances that you should know about right away.

We always recommend not to violate the law, and for a legal solution of all situations it is necessary to apply only to professionals.